If someone came up to you in a party and said "I bet you that two people here have the same birthday," what would you say? It would seem rather unlikely given there are 365 days in a year. Maybe if there were hundreds of people, would you be more inclined to take the bet then?

It turns out that you don't need a giant group of people to have good odds in this situation. Using the power of math we can use probabilities to determine how many people need to be in a room for any two people to have 50% chance of sharing a birthday.

It's sll in the math

365 days available for the first person

364 for the second person

365 days available for the first person

364 for the second person

363 for the third person

With each person that is added on, the chance of all of them having a different birthday decreases.

The equation for n birthdays is:

So how many people need to be in a room for one person to have a 50% chance of sharing a birthday with another? By using the equation above, the variable n can be increased until we get a result around 50%. It turns out that for you to have a coin flip's chance, only n = 23 people need to be considered. In other words, in a room of 23 people, there is a 50% (technically 50.73%) chance that two of them will have the same birthday.

Odds with over 23 people

Let's start increasing n further. At 30 people, there is a ~67% chance of two matching birthdays. At 40 people the probability increases to ~87%. Up at 57, the chance is better than 99%. The graph below illustrates this. 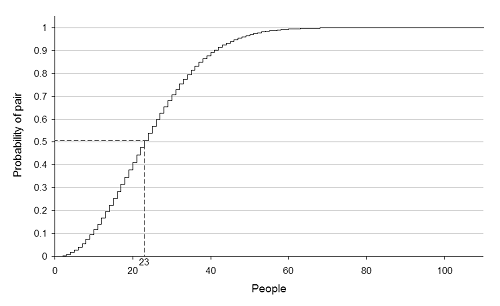 So remember that if someone ever approaches you with "I bet you that two people here have the same birthday", if there are at least 23 people then it may be worth taking the bet!