What Causes a Lunar Eclipse?

Space is full of wonders, ranging from activity in our own solar system to phenomena found 13-billion light-years from Earth. A lunar eclipse is one of these astronomical marvels that comes around only once in a full moon. Not only do we get a front row seat on Earth for the event, but our planet is the main reason it happens at all.

Why isn't there a lunar eclipse every full moon?

We all know that the moon orbits the Earth once every 30 days or so. What may be lesser known is that the moon's orbit is not on the same plane as the Earth's orbit around the sun, but rather tilted 5Â°. 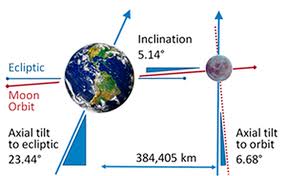 If you put your hand in front of a flashlight, it will project a shadow which you can see on the wall behind. Now imagine replacing the flashlight for the sun and your hand for the earth. Similarly, the Earth projects a shadow where it blocks out the sun. The area where it only partially blocks out the sun is called the penumbra and the part where all direct sunlight is blocked is called the umbra.

When the moon is full at the same time that it's crossing Earth's orbital plane, it is inside of the umbra and is completely blocked from the sun.

So how can we see the moon if no sunlight is hitting it? Well technically sunlight is reaching the moon, but not direct sunlight. As sunlight passes through the Earth's atmosphere the different colors that make up the white light are scattered in random directions by atoms. Usually the blue end of the spectrum gets scattered the most (this is why the sky is blue) while the redder end of the spectrum can make it through more of the atmosphere unaffected.

The atmosphere does not let the remaining light pass through in a straight line though. What really occurs is that the atmosphere bends (or refracts) the light. Once the sunlight has passed through most of the atmosphere, it is comprised of only reds, oranges and yellows. This light is bent into the Earth's shadow and hits the Moon, giving it its beautiful red glow. If Earth had no atmosphere, then the moon would not be visible during a lunar eclipse.

How Does the Rear View Mirror Dimmer Work?