Every kid has their favorite stuffed animal growing up, and for many it is the stuffed bear. Maybe it is the smile it has, or the soft fur you can lay your face against or just the comfort of having a companion to help fight against the monsters at night. Whatever the case may be, through the decades the teddy bear has become so popular that they have practically become synonymous with childhood. How did such a simple idea become so popular?

When you think of "teddy" thoughts of Theodore Roosevelt may come to mind (his nickname was "Teddy," after all). Well you would be correct, and the story takes us back to the early twentieth century.

In November 1902 Andrew Longino, the Mississippi governor, invited President Roosevelt to his state for a bear hunting trip. After hours of searching, a few folks from Roosevelt's group chased down a bear, clubbed it and tied to a tree.

They then fetched the president and suggested that he shoot the bear they had captured for him. Upon seeing the situation, he refused to shoot the bear deeming it unfair. News of his sympathy traveled fast.

Clifford Berryman was a political cartoonist working for The Washington Post at the time. When he heard of Roosevelt's good deed he went to the drawing board to produce this 1902 cartoon expressing the president's humane nature. 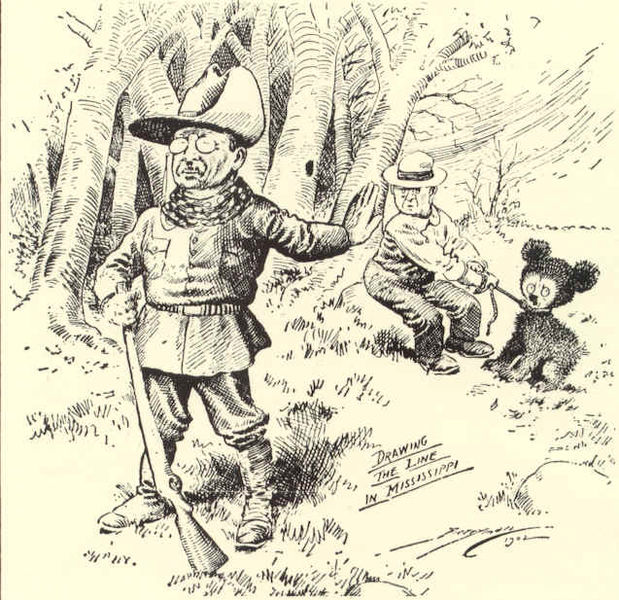 When a small New York store owner - Morris Michtom - saw the cartoon, he was inspired to create a stuffed bear. After getting permission from Theodore Roosevelt for the name, he placed the bear in his store's front window with a sign reading "Teddy's Bear" to symbolize the bear that had been spared during a hunting trip one day in November, 1902.

The idea became such a hit that in 1907 Morris and his wife founded the Ideal Novelty and Toy Co. to market their product, and the name stuck. The company went on to have many successes, including the licensing of the Rubik's Cube that we are all familiar with today.