On July 4th as America celebrated its 236th birthday, people came together for a conference in Geneva, Switzerland to discuss important data regarding one of the biggest mysteries in the universe. For the past few years, two groups at the Large Hadron Collider - ATLAS and CMS - have been on the hunt for an elusive particle linked to a field that is responsible for giving mass to other particles in the universe.

For thousands of years humans have wondered about the universe. By the 1900s, they were asking big questions like, "how do actions at the smallest scales give rise to what we see around us?" Through the amazing minds of many scientists and theorists, a theory was derived that could explain 3 forces: the electromagnetic, weak, and strong forces. This theory is called The Standard Model, and it is currently our best understanding of the subatomic world.

In the mid-1900s, theoretical physicist Peter Higgs and others working on the Standard Model were pondering as to what gave mass to everything we see around us. Without some type of system, all particles from the beginning of the universe should have continued to travel through space at the speed of light. Since we are here today, and we are made of particles, this is clearly not the case.

What was theorized was called the Higgs mechanism. This theory holds that there is a field invisible to the human eye permeating all of space, a field of which all other particles travel through and, most importantly, interact with.

Now imagine moving your hand through the water, keeping your hand open; this represents a different particle. You will notice that the water is resisting your hand, slowing your motion through it. Make a fist (representing yet another type of particle) and repeat. You will feel the water resist your hand again, but less than before.

In order for a theory to be good science, it must be testable. By analyzing the Higgs mechanism idea, scientists found a way to do just that.

The Large Hadron Collider was built in Europe from 1998 to 2008. This 17-mile loop located hundreds of feet under the ground is capable of accelerating bits of matter in opposite directions to almost the speed of light, and then setting them on a collision course with one another. When these particles smash together, they explode and release a sea of matter. The picture below shows the picture of just such a collision. 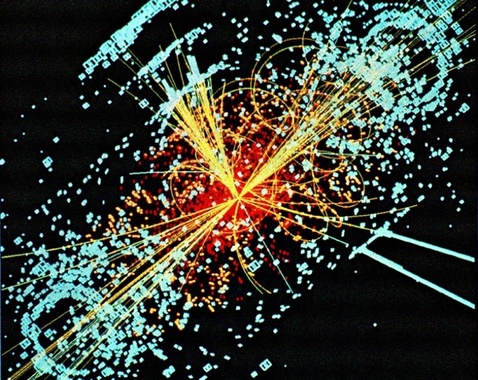 What shoots out in these explosions are fundamental bits of reality. People working on proving the Higgs mechanism found that they could test for the Higgs field by colliding particles just like this. They theorized that within the wreckage of collision maps, a piece of the Higgs field would manifest itself and be detectable, a manifestation in the form of a particle called the Higgs boson. This is precisely what scientists in the ATLAS and CMS experiments have been after since the LHC came online.

The problem is that a Higgs boson, if it exists, would not simply show up in every collision plot. It literally takes billions of collisions and much data collection to build up a statistic strong enough to say, "yes, we've found it" or "no, it doesn't exist." For the two groups at the LHC searching for the Higgs boson, this was precisely their mission.

There were early hints of the Higg's existence before 2012, but it was too soon to say for sure. After more and more data was gathered and crunched through the months, that has finally changed. On July 4th, 2012, people gathered to discuss the results. At 5 sigma (that is, with 99.9999426697% confidence), scientists concluded that a fundamental aspect of the Standard Model - predicted almost 50 years ago - does in fact exist. Yes, we have detected the Higgs boson; yes, there is a Higgs field; and yes, it is responsible for giving mass to other particles. It is, in the most fundamental sense, responsible for why we are here today to ask the question in the first place.

Observation of the Higgs field is a triumph for humanity, and a testament to what we are capable of as a species when we aren't focused on evil. One question has been answered, but there are many more still waiting to be tackled. In the future, the Large Hadron Collider hopes to help answer such curiosities, bringing us ever closer to an understanding of how the universe works, and how a species with the ability to wonder to about it all fits into that picture.