Dog is man’s best friend, and yet we still do not completely understand what is going on in their mind. We do know, however, a good amount about their eyes and how the world must look to them. The common misconception is that they are completely color-blind, leaving them to experience life in boring-old gray. While they are color-blind, it’s not quite that simple...

The human eye is consists of 2 types of photoreceptors called rod cells and cone cells. The rod cells—about 125 million in number—are located around the perimeter of the eye. These cells are responsible for picking up low levels of light, but are not involved in color. The cone cells—about 6 million in number—are located near the center of the eye, and are responsible for giving color the world. The typical human eye has 3 types of cones, each of which is sensitive to different parts of the light spectrum:

As light hits our eyes, the cones pick up frequencies at different sensitivities depending on the nature of the light source. This ratio of frequencies is combined to produce the myriad of colors we observe.

The term “color blindness” is used vaguely by most, and it sounds like it simply means you cannot see color. Color blindness is a bit more complicated than that, depending on differences in the cone structure in the eye. There are 3 main types of color blindness:

As you can see, one will only be fully color-blind (i.e. see in black, gray and white) under the monochromatism scenario.

Once humans were armed with the knowledge of how the eye detects colors, they could then investigate the eye of a dog and compare its cone structure to ours. After figuring out which cone cells (if any) are present in the eye, determining how they see the world becomes a trivial task. So, what did scientists find?

A dog’s eye contains 2 out of the 3 types of cones, meaning their vision is dichromatic. Furthermore, the missing cone is the M cone—the one sensitive to the medium (green) light frequencies—a type of dichromatia known as deuteranopia. With less types of cones to blend colors, the red end of the light spectrum (reds, oranges, yellows) becomes more of a yellow smear. Similarly, the blue end of the spectrum (blues, purples, violets) becomes a smear of blue hues. The middle of the spectrum (green) is white. The image below will give you a good idea of how a dog sees compared to us. 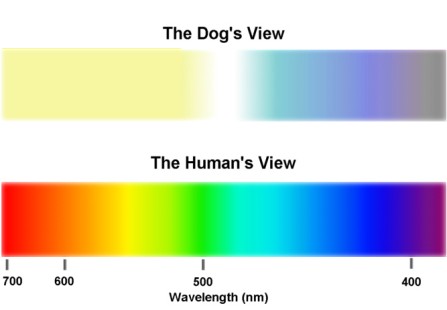 Long story short, dogs can see in color but are limited in their vision experience compared to us. However, dogs do have more rod cells—the ones responsible for picking up low levels of light—meaning they have better night vision. Also, a dog’s nose is so much more powerful than that of a human that they do not need to rely on vision to the extent that we do anyway. So, really it’s up to you whether to feel bad or jealous of your canine companion.

Here are some comparison photos to get a better idea of how dogs view the world: 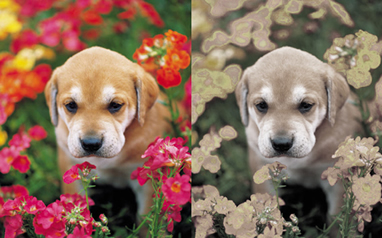