One neat thing about living in a warm climate is the awesome weather that comes rolling through. Sometimes there will be a loud storm with all the excitement of thunder and lightning, other times it will be a quick pop-up shower that appears and disappears 10 minutes later. During the day, if the storm clouds dissipate quickly after the rain stops, the sun will return to illuminate wet landscapes, but this time the colors look much more vivid. What is it about the rain that causes this effect?

From air to water

This effect has its roots in the way light interacts with different mediums. Light travels through the air in a straight line, but when it enters a medium of different density than the one it was just traveling through, it changes direction in a phenomena known has refraction. In the diagram below, if light traveling through substance 1 (air) hits substance 2 (water), it will be bent toward the “normal” line relative to its original trajectory. In other words, the angle of refraction will be less than the angle of incidence. 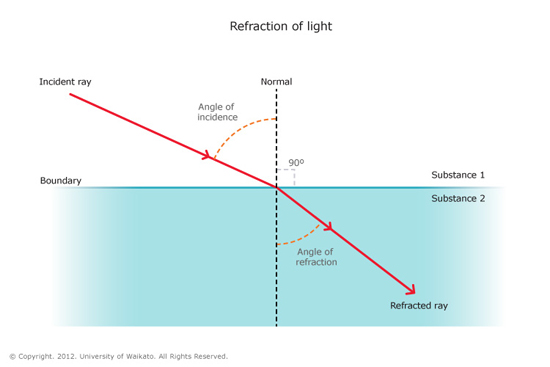 The other important aspect to understand here is color. Everything we see has a color, and each object gets its color from the molecules in the object and how they interact with light, whether it be a t-shirt, paint, or tree bark. Sunlight is comprised of all visible colors. As it enters the atmosphere some of the blue light is scattered out (giving us a blue sky), but most of the light falls upon objects. As the light hits the atoms that make up any given object, some of the wavelengths of light are absorbed while others are reflected. The light that gets reflected is what enters our eyes and what we perceive the color of the object to be. If we see a leaf as green, that is because almost all of the other colors in the color spectrum have been absorbed by the leaf, leaving green to be reflected back. I say “almost” because depending the angle that light hits an object, absorbable wavelengths can bounce off instead of being taken up by the molecules.

Now coat the landscape in a layer of water. The storm has ended and the sun is shining once again. But now, before the sunlight can hit the leaf it encounters water droplets. When the light hits the water, its angle will increase due to refraction, sending the light at a steeper descent toward the leaf below. With the light now hitting the leaf at a more direct angle, those wavelengths that once had a chance to be reflected off the dry surface now have an even higher chance of being absorbed. At the same time, the leaf’s molecules still have no interest in the green wavelengths of light and so those are still being reflected back to the observer. The net effect of this is that the reflected light is diminished of more absorbable wavelengths of color, making the green that reaches our eyes that much more vibrant. Extrapolate this phenomena to every plant, tree and flower in nature and you are then presented with a picture-perfect outdoor scene.

How is the Percent Chance of Rain Calculated?