Ancient Light from the Sun

Light, the fastest thing in the universe, still can only travel so fast—180,000 miles per second. While light from the sun feels like it reaches us instantaneously, it actually takes 8 minutes for it to travel the 93 million miles to our planet. As it turns out, though, the last 8 minutes of light’s journey are just a small fraction of whole story.

The main fuel source for every star is hydrogen. When enough matter gathers in one area, the mutual gravity from each individual particle brings the system closer together. The closer these particles get to one another, the more heat that gets generated. Once the mass has been compressed and the temperature has risen high enough, hydrogen atoms begin to combine to create helium, with each interaction releasing some energy. At the core of our sun, temperatures reach 27 million degrees Fahrenheit, plenty hot for this reaction to occur. A diagram of this proton-proton reaction is below. 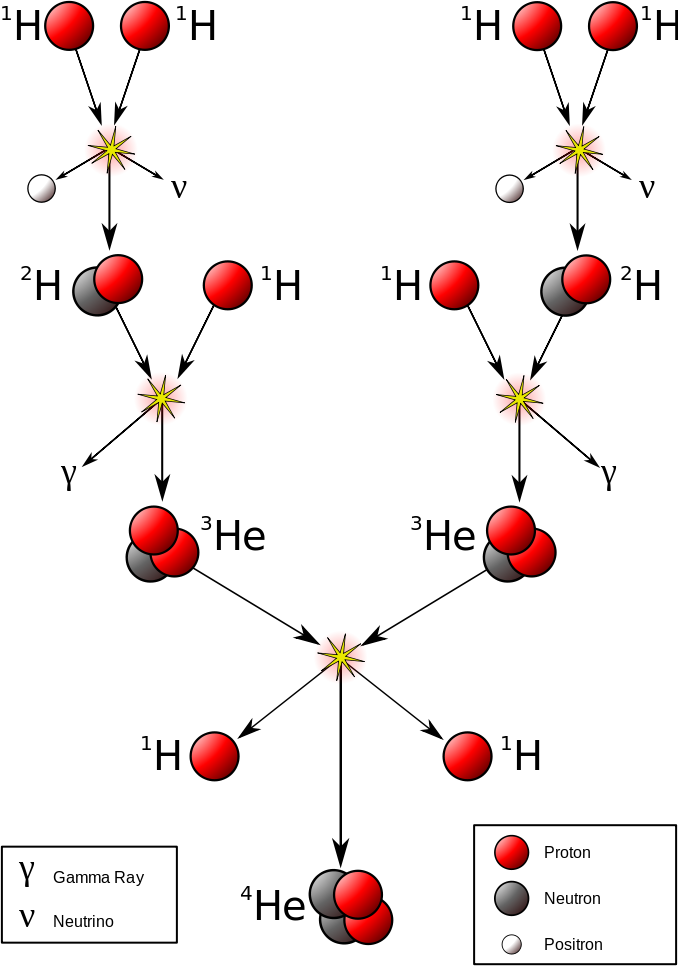 From the Core, Out

Even though the sun is small on the scale of stars, it is still quite massive; one million Earths could fit inside. It’s ~864,000 miles across, and around 432,000 miles from the core to the surface. In the core, hydrogen is actively being converted into helium, with each process releasing some energy in the form of photons. These photons of energy shoot off at the speed of light, but before they can reach the surface they have to make the 432,000-mile journey. The problem is, this space is completely filled with plasma.

The density of the sun fluctuates, with the most dense area at the core and least dense area at the surface. Where the photons originate, they may only be able to travel 0.01 cm before getting absorbed by the closest atom and being re-emitted. Near the surface, they can travel a little bit further between atoms, 0.3 cm. In order to calculate the number of times a photon has to go through this absorption and re-emission process, mathematicians use The Random Walk Problem, as explained below.

So remember: when you hear it takes 8 minutes for sunlight to travel 93,000,000 miles to earth, it is merely the end of a very long adventure.

Handle on the Sun