If there are more than two people riding in a car, it almost inevitable that a nice, calm walk toward the vehicle will turn into a running riot as one person yells “shotgun!” and everyone makes a dash for the passenger door. Of course, the others could just admit defeat and give up the coveted spot, but there is no fun in that. Putting all competition aside, where did the term riding shotgun originate?

This phrase traces back to the days of stagecoaches. Stagecoach transportation was very popular in the late 1800s for moving goods, and if a particular shipment was considered valuable, a security guard known as a shotgun messenger would ride on the stagecoach right next to the driver. In order to defend against potential robberies, the guard would carry a shotgun (or sawed-off shotgun), a weapon that required vague accuracy and that could be fired at short range.

According to Wikipedia, the term riding shotgun was not actually coined during the days of shotgun messengers, but rather later on when stories were written about the Old West. One early example of this is in a 1905 book by Alfred Henry Lewis called The Sunset Trail. Here is a snippet of the text showing the term’s usage: 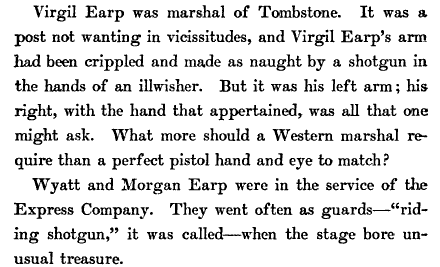 Other references in newspapers and TV eventually came along and soon enough, the term became cemented in our culture. So next time you lose the “shotgun!” game, simply indulge your victor with this little history lesson. Who knows, maybe they’ll be so impressed that they’ll actually give you the shotgun seat (but probably not).