Why Are Lasers Shooting Out of Telescopes?

Videos and photographs of telescopes and telescope arrays can be gorgeous, showcasing these incredible man-made objects against a clear night sky. In some of this footage, though, there seems to be evil afoot. In the dead of night, suddenly a telescope shoots a laser toward the heavens. What’s going on here? Are we shooting down spy satellites?

While the thought of being able to zap satellites right out of their orbits sounds awesome, it probably wouldn’t fair too well for public relations. As it turns out, this laser system is used not for evil, but to improve how scientists view the skies above.

Most of the universe is comprised of empty space. This means that objects that are millions or even billions of light years away can broadcast their light out in all directions for vast distances completely undisturbed. That is, until the light reaches Earth. When light hits our planet, it has to pass through the atmosphere before reaching the ground. Tiny disturbances in the atmosphere above can bounce incoming light all around before it makes it to our eyes or to telescopes, distorting it right at the last fraction of second of its journey through the cosmos. This is the same reason why stars appear to twinkle. From space stars do not twinkle at all. Instead, the â€œtwinklingâ€ we observe is the atmosphere interfering with the light just before it reaches our eyes.

To combat this annoyance, scientists launched a satellite-based telescope into space, the Hubble Space Telescope. With this system, a telescope could orbit the earth and make observations of the universe without dealing with the distorting effects of the atmosphere. Unfortunately, launching telescopes into space can be fairly expensive and so the incentive to search for cheaper designs is high.

To deal with the remaining atmosphere, scientists got clever. By taking the right readings from the sky above they could adjust their instruments to essentially cancel out any atmospheric disturbances. To do this, scientists utilized the field of adaptive optics.

In order to take readings of the sky, a device shoots a laser upward, creating an artificial star in the atmosphere. The atmosphere will interact with this light just as it interacts with the incoming light from distant stars, nebulas, galaxies, and all the rest. This information is fed into system containing a deformable mirror that lies in the light’s path. A sensor calculates the best deformation the mirror should take, and the mirror is deformed correspondingly, an operation that can be performed hundreds or thousands of times per second. This design essentially cancels out any atmospheric disturbances, making images taken by these telescopes almost, if not just as accurate as telescopes out in space.

Take a look at a few images of distant phenomena taken with and without the use of adaptive optics to see the difference this technology can make. 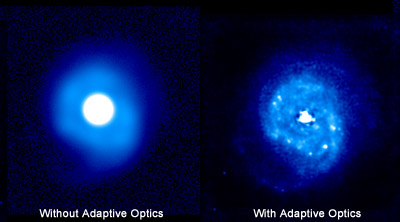 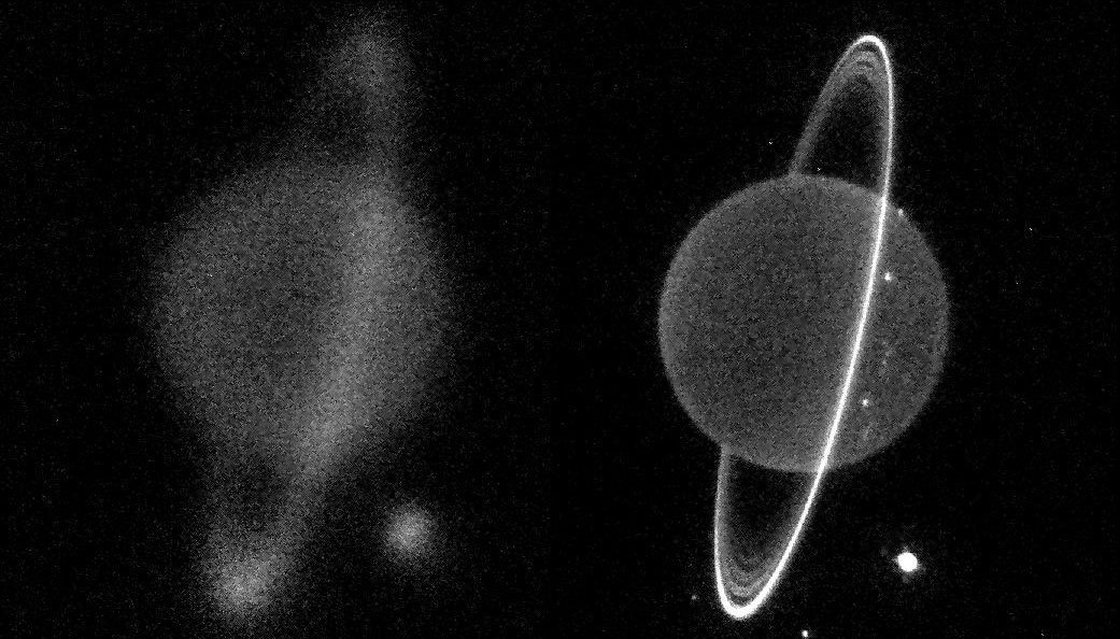