There are many myths and wives’ tales in the world of cooking. One that’s mentioned quite often is that searing meat seals in the juices. This certainly sounds reasonable, but when put to the test, a different story emerges.

Why Searing is a Good Thing

First off, let’s discuss why searing meat is worth doing. When meat is placed in a hot environment like that of a cast iron pan, the high heat causes amino acids and sugars on the meat’s surface to react with each other. This collection of chemical reactions is known singularly as the Maillard reaction, and the Maillard reaction is what gives way to hundreds of new flavor compounds. A piece of meat can still be enjoyed without this browning, but a couple of minutes of high heat on each side (typically 300°F) will unlock a whole other level of flavor.

Now for the question at hand: how does searing meat relate to maintaining internal juiciness? Well... it doesn’t. However the idea came about, there simply isn’t any evidence to support its validity.

To test this, The Food Lab and Cook’s Illustrated both performed experiments. They took two identical cuts of meat, weighed them raw, then cooked them in different ways: one was seared before cooking and the other seared after cooking.

The idea is that if searing seals in juices, then the meat seared first should hold onto more juices and, thus, weigh more than the one seared after cooking. But after weighing the finished products, it was found that both cuts had lost nearly identical amounts of water weight. So if searing didn’t make a difference, what’s really going on, then?

Juiciness comes from the amount of liquid held by fibers in the meat. As the meat heats up, the fibers start to contract and push the liquid out (think like squeezing a wet sponge). Seared surface or not, some of these juices will find their to the surface and leak out. Other juices will remain inside the meat, but won’t be â€œlocked upâ€ in the fibers like they were before cooking.

Another essential component of the cooking process is to allow the meat to rest before serving (about 10 minutes for small cuts and 20–30 minutes for larger cuts). After cooking is done, the fibers in the meat will still be tightened up and the juices will be floating around ( mainly toward the middle where the meat is at a lower temperature). 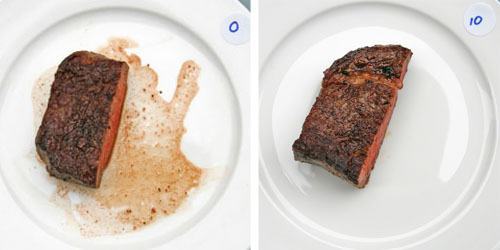 During the resting period, the fibers will begin to cool and relax, allowing them to reabsorb the juices. If you cut into a piece of meat without allowing it to rest, the juices you so carefully preserved during cooking will flow out and onto the plate. Give the meat a chance to rest and all that flavor will end up in your mouth, instead!

Maillard Reaction
Does Searing Meat Really Seal in the Juices?
The Food Lab: How to Cook a Perfect Prime Rib

Why Proving You’re A Human Should Make You Proud