The Most Accurate Clock in the World

For most of our planet’s life there has been no defined concept of time. Humans, however, quickly discovered just how useful defining the time could be. Even without precise numbers, they were able to understand that in the morning the sun is low, noon is about when the sun is directly overhead, and if the sun is going down, it must be time to work on getting a fire started.

Over the centuries, humans have divided time into smaller and smaller chunks, all in an effort to make our lives more convenient. First, the day was divided into hours. Then the hours were divided into minutes, and finally the minutes into seconds.

With the invention of time, so came the invention of time-keeping devices. There’s no doubt that it’s much easier to have a clock handy than to have a human mentally count the seconds in a day; plus, a clock can tick at a much more consistent rate. But these clocks aren’t perfect. Surely anyone who has an analog watch has found that after a couple weeks/months/years they have to adjust the hands because it would read a minute or 2 off of the actual time.

But this then raises the question: what is the actual time? And how can we measure time in a way that doesn’t require us to adjust the clock hands every so often?

When it comes to measuring time, no place is more accurate than the National Institute of Standards and Technology. Located in Boulder, Colorado, this building houses one of the most advanced pieces of time-keeping equipment on the planet. In lieu of batteries and gears that can lead to the inconsistencies most time pieces are susceptible to, the NIST-F1 clock utilizes something much more fundamental: atoms. Cesium atoms, to be specific.

One of the fundamental properties of atoms is that they emit and absorb energy, and NIST exploits this ability to turn the atoms into a clock. To do this, cesium atoms are put in a vacuum chamber. Lasers are used to gather these atoms up into a ball and reduce their temperature to near absolute zero. Then they are hit with microwave radiation. The atoms react by absorbing and re-emitting this energy (picture a strobe light quickly flickering on and off). 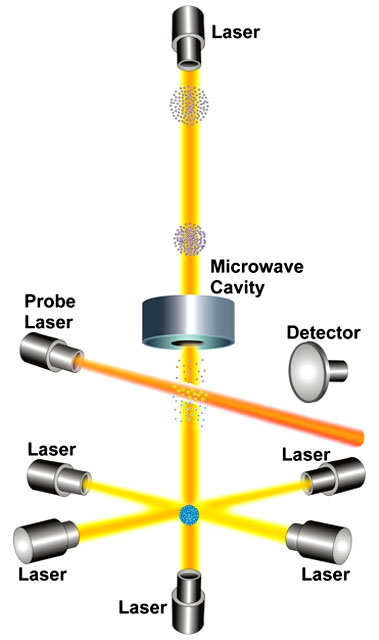 To convert this pulsing into a time-keeping method, a detector is used to count how many times the cesium atoms “turn on and off” in one second.

Not only is this frequency fast, but also extremely consistent. While a wrist watch may lose the correct time every month or so, this clock will only gain or lose a second every 100,000,000 years!

The Whiter the Bread, the Faster You're Dead

What Causes a Brain Freeze?